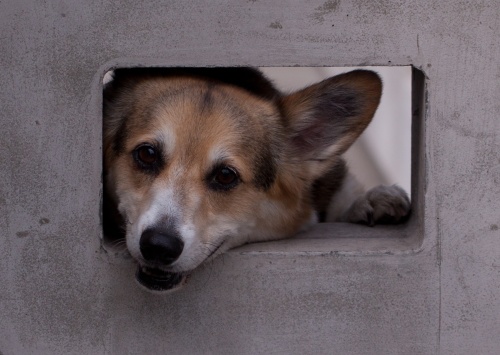 Born on February 14, 2004, Moli is our sweetheart, though that is not the first adjective that would jump to Mic’s mind to describe her.  At least not when she was a 12 lb ball of fuzz that would pin him on his back until he cried when we first brought them home.  She has certainly mellowed over the years but she is still our bossy girl.

I like to call Moli my velcro dog as she follows me everywhere.  And actually, sweet is the very word I use to describe her basic personality.  She is just a little – OK, a lot – high strung and hyper  vigilant which makes her a challenge to live with sometimes.  It also makes her an eager learner and great fun to play with.  She is definitely my dog – most of the day.  At about 8 o’clock every night, she flips a switch and becomes Mike’s dog, following him everywhere.

At age 10, she is still very active and in great shape.  Moli loves walks, especially at the golf course or Drumheller springs, going to our friend Janey’s ranch, doing tricks at bbq’s, belly rubs, food and her “babies”.  She has a basket full of stuffed squeaky animals.  She loves to go pick one out and carry it around the house.  She never chews them up – just carries one around.

Moli loves people.  We can take her anywhere and she is very popular.  Unfortunately, she does not have the same affability toward other dogs – except Mic of course.  Since she got past the phase of trying to kill him, she adores him and cries if we try to take him somewhere without her.

Her pic above was a fantastic bit of luck.  We were walking on the Monroe Street Bridge in downtown Spokane when Moli just hopped up and looked through one of the cutouts at me.  I just happened to be framing a pic of the bridge and caught a perfect image of my girl.  Thanks to my Moli, I took a third place photo prize at the fair last year.