I have alluded to Moli and degenerative myelopathy (DM) but haven’t said much more. I guess I have been so busy just taking care of the pack that I haven’t made time to write about them! So will try to update now.

First, though, a little background. DM is a disease that affects the spinal cord of dogs. There has been a genetic mutation that has been identified as a major risk factor for development of DM. The disease primarily affects German Shepherds, Pembroke Welsh Corgis and Boxers but the mutant gene has been identified in over 40 breeds of dogs.

DM causes the myelin sheath around the nerve fibers in the spinal cord to degenerate and also causes the loss of the fibers themselves. The pathology of DM is similar to ALS (Lou Gehrig disease). This loss of neural pathways means that the brain cannot communicate movement commands to the limbs, and the limbs cannot communicate sensory information to the brain. It usually begins in the thoracic spine so the back end is where symptoms start. DM usually affects dogs over 7 years and the life expectancy after development of the disease is six to 36 months.

What we see first is weakness in the back legs, stumbling, abnormal wear of the nails (from dragging of the feet or abnormal position of the feet when walking), tremors, loss of muscle mass. There is also a loss of proprioception – the brain does not really know where the butt is. This is the failure of the sensory nerves to communicate to the brain. It is progressive, incurable and eventually fatal, but thankfully, painless in and of itself. More on that below when I talk about Moli’s journey. There really are no conventional therapies to treat or affect the trajectory of the disease. There have been some promising results with accupuncture and alternative therapies in slowing disease progression but no cures.

DM is a disease that can only truly, definitively be diagnosed on necropsy. So in practical terms it is a diagnosis of elimination. Multiple other things can cause symptoms that may look like DM and CAN be treated so a trip to the vet is always a must.

As hindsight is always 20/20, I can look back now and see that Moli’s symptoms probably first started Spring of 2015. She would occassionally trip going up a curb. She would take a little tumble when we played ‘rings’ (fetch with a donut instead of a ball). By Fall of last year, she was showing a little foot drag and some rear end swaying that, if it didn’t indicate a serious problem, would have been funny to watch. My little drunk corgi. Watching her from behind, her right side was worse than her left. Her feet would cross as she walked and she would trip herself. This progressed to her falling over onto her right hip. No signs of pain. Antiinflammatories, steroids – no help. We saw our holistic vet, Dr Thomas, and he switched her accupunture protocol from treating her mild arthritis to treating her DM. He gave me home exercises and accupressure points to stimulate. And she responded very well. We saw a definite slowing of the downhill slide. Dr. Thomas was very frank: he could not cure her, the best he could do was postpone euthanasia.

Moli did OK into the winter without too much decline. She had some challenges though. We have wood floors – hard for pups with mobility issues. We found some dog socks with traction which helped for awhile. We used MuttLuks or PAWZ for outside walks. These worked great for quite some time. Then she started dragging her feet even more and the MuttLuks and PAWZ actually started tripping her. So then we tried using a sling. At first it was hit or miss on how she would walk in it. Ironically, as she got a little worse, she walked better in the sling – maybe she hasn’t been fighting it as much.

As I write, she is snoring in her laundry basket at my feet. Yes, I am keeping her in a laundry basket. In the living room we have a playpen. It works. Part of the issue is the other dogs. I don’t want her caroming into one of them and an altercation starting. And it would and has. So we manage the environment as best we can.

One of the things that is very important for dogs with DM is exercise. This was difficult in the dead of winter in snowy and icy conditions. We would try to walk and she would just fall over and slide. We were blessed with an early Spring this year so have been able to take advantage of that! With the coming of dry ground, we discovered that if we ran with her, Moli could stay upright. So we ran. After several weeks, while the running was still better than trying to walk, Moli could go shorter distances and would flop over onto her hip. No problem except then she would try to drag herself to me. We got a few knee scrapes and bloody back paws. So we tried to limit all outside activity to grass. We had varying degrees of success and realized that this limited her world to the back yard. Not great for a pooch who had been taken to lots of fun places to run and explore her whole life.

Which leads me to my favorite innovation so far! The wagon. We actually got the wagon when we took Mic down to WSU (Washington State University) in our quest to get more info on his problem (CCD, aka doggy dementia) and wanted to take Moli too but knew she could not keep up on her own four feet. Found THE COOLEST wagon – Mac Sports Folding Wagon (in pic at top). There are other brands, this is just the one we got – and we love it. When we took a tour of the vet school, Moli was quite the sensation in her wagon. When Mic decided he was done walking and we put him in too, we darn near brought classes and labs to a halt.

With the coming of daylight savings time and an extra hour of daylight at the end of a workday, the light in our heads went on! We could load Moli in the wagon and take everybody to the park and run/walk/drag there. BINGO!! With (now) regular exercise, Moli is doing pretty well. Mic is arthritic (and demented) and has some trouble both keeping up when we walk and remembering that he is with us, so we put him in the wagon too. We are a regular parade when we are out – the Rat Pack riding in the wagon and the Brat Pack walking with. Or in the case of Megwyn, helping to pull the wagon.

We just ordered a cart for Miss Moli. Looking forward to trying that. And posting here!

Referencing pain from above: her back end has no pain. She does have some front end/shoulder pain from compensating for her rear end deficits. We give her arnica or Rimadyl as needed.

So far, Moli still has control of bladder and bowel. It takes longer to go but… what doesn’t take longer as we age…. She gets to sleep with me now. And I am treasuring every day with her. Though she still has her moments of getting on my last nerve…. 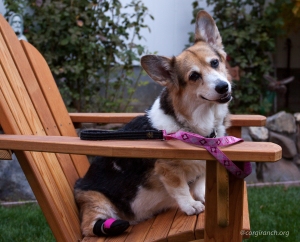 Notice that her MuttLuks match her leash – fashionable at all times.